We take this motto as our obligation to give each child the opportunity to develop their full potential. Our students are encouraged to act responsibly and become self-reliant and independent young adults, enabling them to meet the challenges of today and tomorrow.

Together into the Future

Gymnasium Steigerwald-Landschulheim Wiesentheid is a co-educational secondary school with a boarding school for children from 10 to 18. The German Gymnasium leads to a diploma called the Abitur and prepares pupils for university or for a dual academic and vocational education. Curricula differ from school to school, but generally include subjects like German, mathematics, computer science, physics, chemistry, biology, geography, art, music, history, social studies, and several foreign languages among others. The academic teaching at the LSH focuses on three optional branches within the Bavarian educational system:

Apart from subjects which are based on the curriculum, the LSH offers various optional subjects enabling the pupils to live and develop their individual talents. These subjects are for example German as a foreign language, Spanish, chess, the school choirs, musical theatre, musical groups, drama group, sports such as basketball or self-defense among others.

School with an International Focus

School with a Natural Scientific Focus 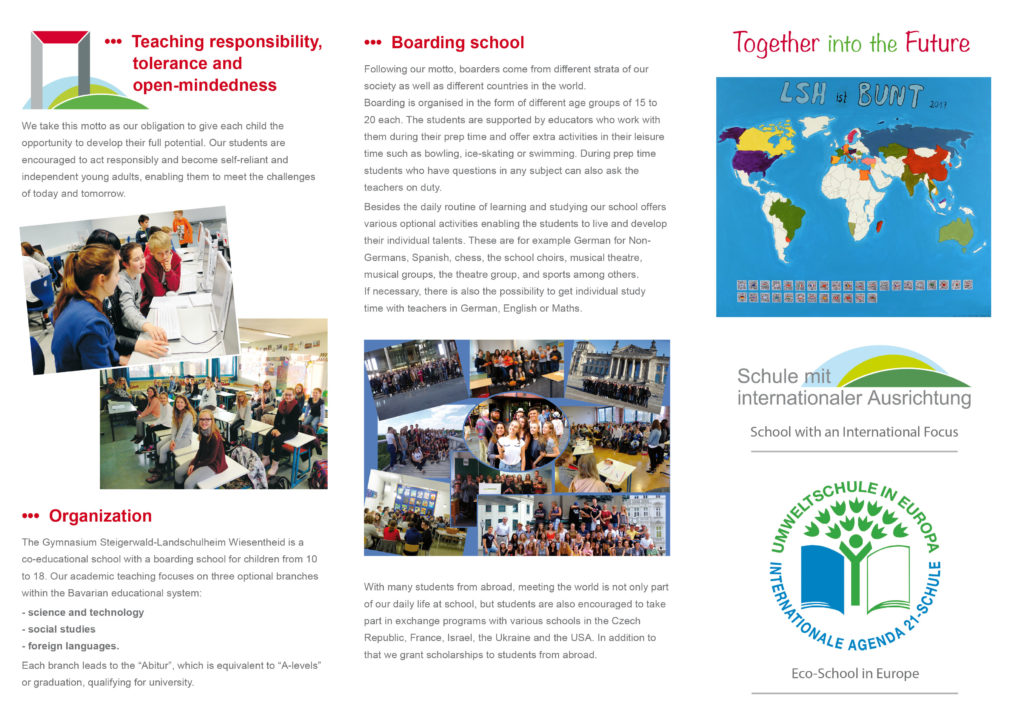 School with a Basketball Base Camp

Our school, Gymnasium Steigerwald-Landschulheim Wiesentheid, offers preparatory courses for foreign language certificates in English and French based on the Common European Framework of Reference for Languages (CEFR). Obtaining one of these certificates means that employers and educational institutions can easily compare language qualifications to other exams in their country.

Both certificates are awarded by external partners. They offer their services at a reduced entry fee for pupils at all state schools.

Our school offers help with preparing for the Cambridge Certificate of Advanced English (CAE) which certifies a knowledge of English at level B2/B2+ of the CEFR.

The equivalent is the DELF Scolaire (Diplôme approfondi de langue francaise) which also tests candidates at level B2/B2+ of the CEFR.

All children at the age of six attend the first four years at school in classes of mixed abilities. Here pupils will learn basic reading and writing skills, basic maths and a fundamental knowledge in the sciences. At the end of the fourth year parents and teachers decide which path their children will take from there.

All secondary schools have in common that pupils at the ages of 10 to 16 (years 5 to 10) get a solid foundation of general education. At the end of year 10 pupils will sit exams to attain a certificate of secondary education. Pupils with high abilities can then move on to other secondary schools on their way to higher education.

Over the course of eight academic years (year 5 to year 12) pupils will attain a broad education to prepare them for higher education. One of the fundamental aspects of this type of school is the teaching of at least two foreign languages with the option to add a third one in year 9. At the end of year 12 pupils will have to sit exams to attain the Abitur, the highest school degree available in Bavaria. The Gymnasium is the direct way to gain access to higher education at a university.

For further and more detailed information please visit the website of The Bavarian Ministry of Education (https://www.km.bayern.de/education-in-bavaria.html)

Students’ clip about the LSH from the Project-Seminar “Publicity Management”